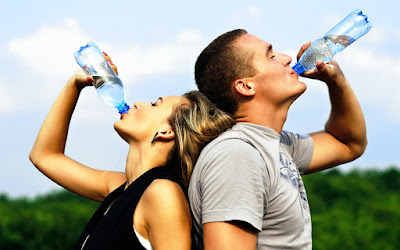 You have been jogging for 20 minutes. You are hot and sweaty, and you are beginning to tire. What is the problem?

The most likely answer is that you are beginning to feel the effects of dehydration. Generally, the average person is not 100 percent hydrated. Add exercise and a warm climate, and it spells dehydration in a big way.

Do not depend on thirst as a signal to avoid dehydration!

Your body’s drive to drink is not nearly as powerful as its drive to eat, and the thirst mechanism is even less powerful during exercise. Therefore, you must plan to drink early and often.

How Much Should You Drink?

During exercise:
Drink one-half to one cup every 15 to 20 minutes during exercise. Although this might seem tough at first, once you schedule it into your regular training routine, you will quickly adapt to having fluid in your stomach. In fact, the fuller your stomach is, the faster it will empty.

After exercise:
Replace any fluid you have lost. Drink two cups of fluid for every pound of
body weight you lose during exercise.

**In hot, humid weather, you need to drink more than usual. (But do not forget that dehydration also occurs during cold weather exercise–your body temperature rises, and you still lose water through perspiration and respiration.)

What Should You Drink?

Should you just reach for the water bottle when you need to hydrate, or are sports drinks better? The answer to this question depends on how much and how hard you exercise–and how much you like water!

If you exercise less than one hour, water should be fine.

If you exercise longer than one hour, the fluid should also supply energy to your working muscles. In this case, drink about two to four cups per hour of fluids with carbohydrate concentrations of from 4 to 8 percent. (Most sports drinks fall in this range.)

What About the Sodium in Most Sports Drinks?

The average exerciser does not need to replace sodium or other electrolytes during exercise. Even well trained marathoners will reserve enough sodium to complete a competition. After heavy exercise, however, it is best to eat a meal that contains some sodium to replace what you may have lost. Follow your cravings–do not worry about restricting the sodium in your food immediately after running a marathon.

If you are participating in an ultra-endurance event that lasts four hours or more, you should consume a sports drink that contains sodium. Fifty to 120 milligrams consumed during exercise should be sufficient. (Sodium content in sports drinks can range from eight to 116 milligrams. Read the label.)

If you are just an average exerciser, you might think sodium in drinks is just a waste. However, sodium may play a different role for you. Sodium helps your body absorb fluid, and along with sugar, sodium may enhance a drink’s taste, which can encourage you to drink more.

Therefore, if you are an avid water drinker, you will benefit little from using a sports drink unless you are exercising for at least one hour. However, if you do not like water, sports drinks that taste good and contain less than 8 percent carbohydrate and some sodium might offer you a performance advantage. At the very least, if they encourage you to drink more, they will have done their job.

It is essential that you are aware of the warning signs of dehydration and heat stress.

**Be sure to drink plenty of fluids especially if you exhibit any of these warning signs.