That’s a super hilarious thing to hear myself say. And I’m sure that anyone who has known me for any amount of time thinks it’s even funnier than I do. But I love being a parent.

For years I swore I’d never have kids. I was certain of it. It just wasn’t the direction I imagined my life would ever take. My friends were parents, my sister, my cousins. I watched them interact with their children. I saw them doting and swooning over every little thing. Every silly smile, raised eyebrow, burp or giggle would bring about a round of applause not unlike what you might expect to hear during the encore of a Led Zeppelin concert.The adoring oohs and aahs and laughter of the approving parents were cute, for a minute. Sure, they were proud. Sure, they thought their kid was the cutest kid on the planet. And the smartest. And the most athletic. Guess that’s just human nature.

I just didn’t understand this behavior. Sure, they were cute kids. I would briefly play with them or aggravate them. I liked to make them laugh. But the first hint of a cry, or a snotty nose, or a poopy diaper, and this boy was out. I wanted nothing to do with it. I have a horrible confession to make. Don’t think badly of me, ok? When people look at newborn babies and they say things, like, “Oh, he’s so cute, he looks just like his daddy!” or “Oh my goodness, she’s so precious, she looks just like her mama!” or “She’s got her daddy’s nose” or “Look at that little dimple when she smiles. Just like her papa!” OK, guys. I don’t see any of that. I try, I really do. I look at them, and I grin and nod my head and I agree. But I don’t see anything like that. All I see is a little squashed up face with wrinkly skin, and a bald head with no teeth. I suppose they look more like my ninety-year-old granddad than anything. But I can’t really say that unless I want to be disowned and banished by pretty much everyone.

There were few things I was certain of in life, but I was sure I’d never become one of those embarrassingly proud daddies who gloated over a child’s every move. Or so I thought.

Fast forward a few years. My wife April came along, with her two beautiful daughters. I took the whole mess of them under my wing and I never looked back. All of the sudden I was a dad. It all happened so fast, I couldn’t believe it. I found myself in laughable situations that were unfathomable only a short time before. 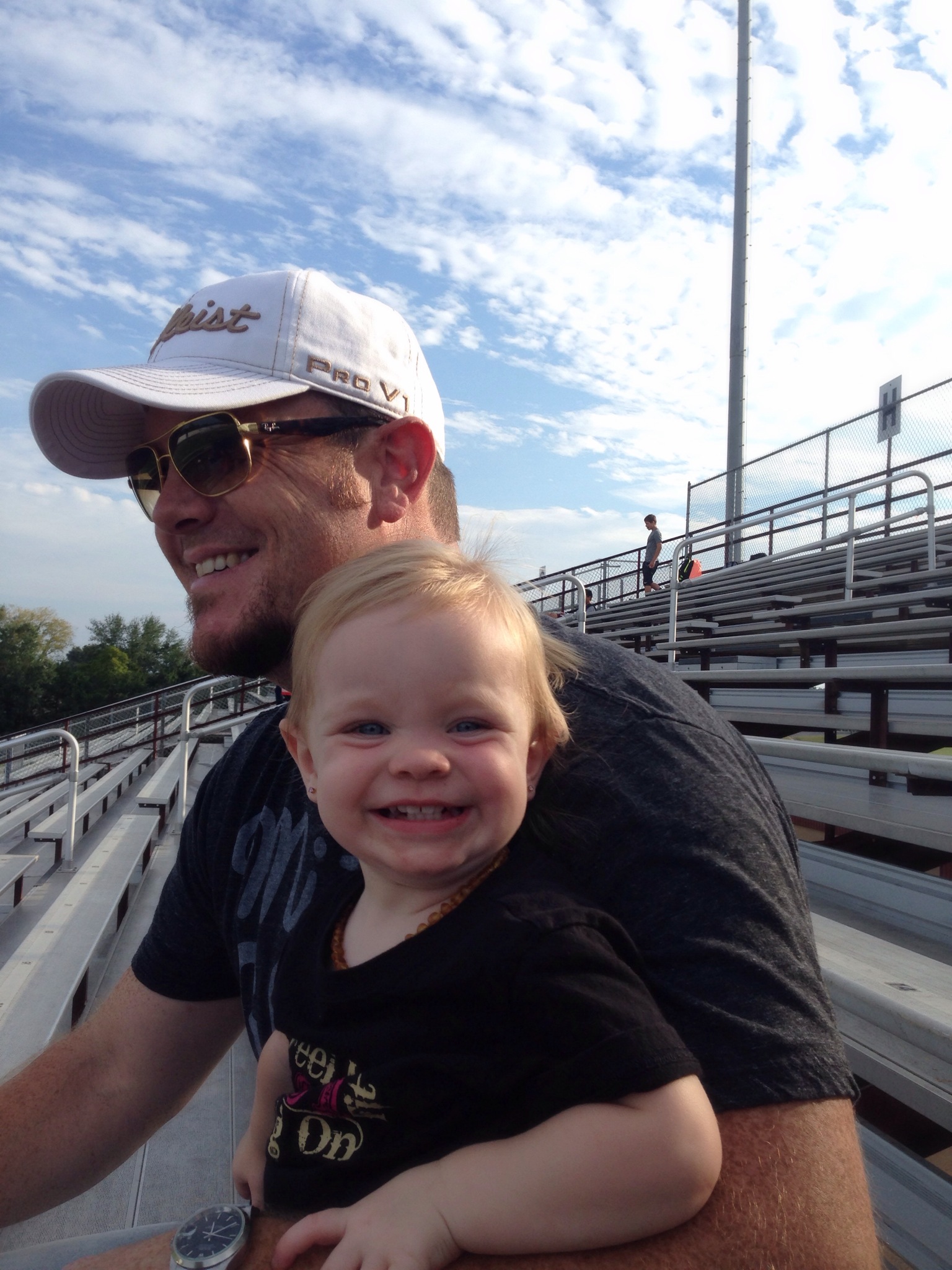 Suddenly, I was at the American Girl Doll store, surrounded by thousands of dolls and giddy, squealing little girls. About $300 later, I found myself outside on the sidewalk wondering what the hell had just happened. I found myself on the sidelines at a Pee Wee football game, cheering on my own adorable little cheerleader, just praying that today would finally be the day she won the spirit stick. I found myself taking them to haunted houses, to the mall, and to little kid movies. But it didn’t stop there. Oh no.

Being a parent brings out the best in people, I believe. It makes you want to be better. It brings out a whole other side that you didn’t even know existed. And, it brings out the completely goofy. You know exactly what I mean, don’t you? Because your kids make you act goofy, too. It’s ok, you can admit it. It brings out the goofiest in all of us. Think about it.

Think about holding your little baby above your head, looking at his or her smiling, toothless face. What would you do? What would you say? I’ll tell you what you would say. You would say, “Shmoopy-poopy-dooboo! I wuv you wittle baby doll! You’re such a beautiful wittle baby booboo!” Or something very similar to that. I guarantee it.

Anyhow, the girls and their mothers stayed out on the patio, went swimming, and played around in the yard while the dads sat inside and watched the Sooners/Tulsa Golden Hurricane’s game.

As we sat there talking about all of these “manly” things and drinking our beer, our daughters would enter the room for a few minutes, only to turn and run back out again. It wasn’t until the night was over that I began to think about some of the things we’d said when our daughters burst into the room. Our conversations were borderline ridiculous. Here is an excerpt from our beer drinking/football watching/man talking/daddy-daughter conversations:

“We’re going to start potty training soon. She grabs her tee-tee now when she needs to go potty. INTERCEPTION! Did you see that?! Great play!”

“Hey Mom, do you know where Hadley’s LuLu is? She really needs her LuLu and her bop-bop, and then I’ll put her down for a wittle nap. GO DEEP! Did you see that sick block?! He totally laid him out.”

“No, no, Gracee. No. You need to sit on your bottom or you’ll fall and hurt yourself. Thank you, that’s a good girl. Oh, those are sweet kisses! Smoochy smoochy smooch smoochy!” And then I swooped her up in my arms and kissed and nibbled and blew zerberts on her neck while she giggled the cutest giggle that has ever been giggled.

“Hey, does anyone know where her binkie is? We’ve got to find it, seriously. We don’t find it then stuff is about to get real. No, she doesn’t like that one, the nipple is too small. We’ve got to find the other one. TOUCHDOWN! I think it was a really good move putting Blake Bell over into the tight end slot. You know he’s going to pick up three or four yards on every play.”

So, apparently this is just how we talk now. Pee-pees and tee-tees, binkies and LuLus, football and beer, mixed in with the occasional curse word. Dad talk. It’s a real thing. If you’re a young dude out there reading this right now, and you think to yourself, This is all just so silly. That will never be me. No way. Not a chance. Then I say to you, you wanna bet? Yes. Yes it will. You will be powerless over it. Don’t feel bad, though. It’s taken down the best of us. But guess what else? You’re going to love every single minute.

I am the dad of 3 beautiful girls, and the husband to another beautiful girl. I deal with a lot of estrogen. And it’s usually pretty entertaining. Enjoy.

Previous articleBeatboxing: I’ve Still Got It
Next articleThe Worst (Best?) Christmas Puns Ever

RSU Women’s Golf Concludes Season With Final Round of...