The Daddy Diaries: Flew the Coop

So yesterday, my lovely wife made a horse trade. She traded Sparky (from her unicorn sessions) for TWO smaller miniatures, both of which will undoubtedly become unicorns as well at some point in their lives. 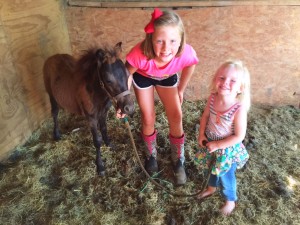 The itty bitty one is only four months old. He’s missing his mama right now. A lot. And it’s so sad. Emma was in the stall with him yesterday evening playing and rubbing on him. She didn’t shut the gate behind her. He saw an open gate, and he made a break for it.

Interesting fact: a scared pony can run as fast as a cheetah chasing a gazelle. I’m not even kidding. He was like a little rocket.

Interesting fact #2: I am NOT as fast as a cheetah chasing a gazelle.
It was like a race between Dale Jr in a NASCAR and me on a tricycle.

I was 100 yards behind him within a matter of 2 seconds. And he wasn’t slowing down. I was, however. I was breathing like James Gandolfini running a triathlon. I couldn’t have been more sweaty. And the little caballo was gaining ground with every freaking stride. I hollered back at April, “go get my rope!” So she headed back to the barn to get my rope. 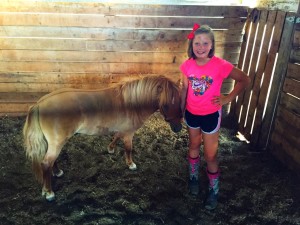 The pony, on the other hand….he caught another gear like he’d been hit in the ass with a hotshot. Little dude was GONE.

Interesting fact #3: Fences mean absolutely nothing to a horse the size of a dog. They can go through, or under.

Meanwhile, the neighbors have a new dog that did not approve of my presence on their property. He was all over my ass, but I was too tired to even care. If he bit me, he just bit me. My legs were mostly numb anyhow.

Finally, the dog realized that I appeared to be suffering from emphysema or some other lung malfunction and was no danger to anyone, so he went back home. I went further back to another house behind the neighbors, and there stood the little turd. Smiling at me, it seemed, as he ate grass by their propane tank. 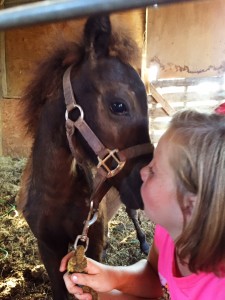 He’s standing still. Oh thank God. I eased up on him like mongoose on a cobra, walking ever so gently, although I’m sure my incessant wheezing wasn’t helping my sneakiness. I got within 10′ of him and April is coming up behind me. She couldn’t find my rope. Awesome.

I’m talking to the colt. He’s just staring at me. I inch closer…closer…closer….he makes a run for it. I hurl my body at him and somehow, caught him by the front leg. You may think to yourself, “oh good, he caught him. It’s over.” Nuh uh.

Interesting fact #4: A tiny pony may be small in stature, but are still as strong as Andre the Giant.

He hit me full force. Our heads butted. I bit my lip. He hit me in the balls with his front foot. I moaned. He jerked back. I fell forward. I grabbed another leg, and finally wrestled him to the ground. Again, with the wheezing and sweating. I actually feared for a moment that I was suffering from a massive myocardial infarction. I held on with all the strength that I had left, and finally he stopped fighting. I had won. Either that, or he had died under my weight. But no. He whinnied. He struggled a bit more but realized that I would sooner die than let go of him.

It was a mighty long walk back to our barn. As we approached the house, Emma was sitting on the porch swing. She said “sorry Stoney.” I’m not sure that I replied, but it was less out of aggravation and more out of my continued heavy breathing and possible cardiac arrest.

April said the little guy “flew the coop.” So that’s what we named him.

Meet Coop. I suspect there will be more stories about him coming soon.

You Could Win CASH and a TV at Will...

Cherokee Casino Will Rogers Downs is giving away tons of cash PLUS a big screen TV, just in time for your socially-distanced Super Bowl...
Read more

Have you noticed the dirt moving off Country Club Road in the Claremore Plaza? After much rumor and speculation, CIEDA, in partnership with the...
Read more

Would Your Business Host a Valentine Drop Box? Please?

Healthy Community Partnership is looking for Rogers County locations who are willing to set out a decorated box to collect Valentine's card donations for...
Read more

You Could Win CASH and a TV at Will Rogers Downs!