From The Pioneer Woman

I made these on my Christmas episode a couple of years ago when I had friends over to the Lodge for a cocktail party, and I just realized as I made a batch yesterday that I’d never posted them here! They’re just lovely little flour tortilla wraps like the ones you’ve had a parties since 1990, but with bright red and green “jewels” that really drive the Christmas point home. And tortilla rollups will always remind me of my best friend Hyacinth, who introduced me to the circular little wonders a long, long time ago.

They’re easy. You can make ‘em ahead. There’s nothing complicated about them.

Just watch. I’ll show you!
Lop the tops and bottoms off a red and green bell pepper, then pull out the seeds. 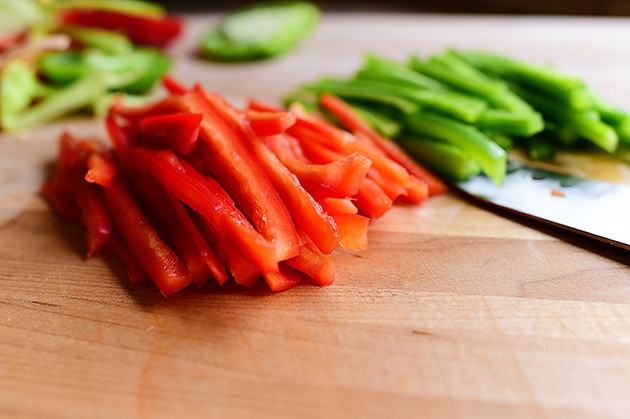 Slice them into very thin strips… 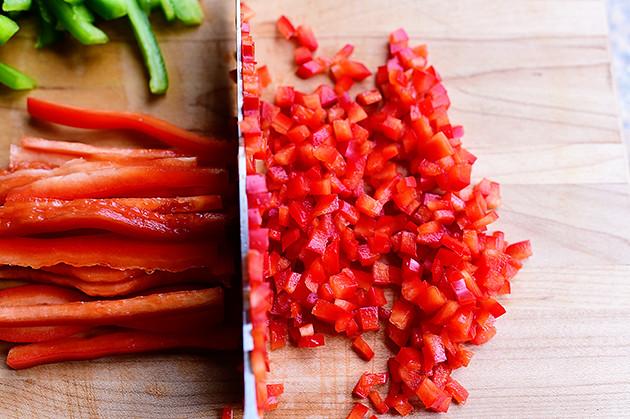 Then cut them in the other direction… 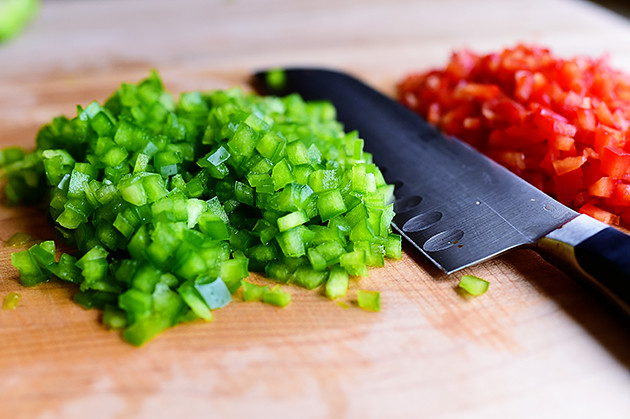 To dice ‘em up. You want the dice to be as small as possibly so the rollups will be easier to slice, and so that there won’t be big, honkin’ pieces of pepper messing things up. 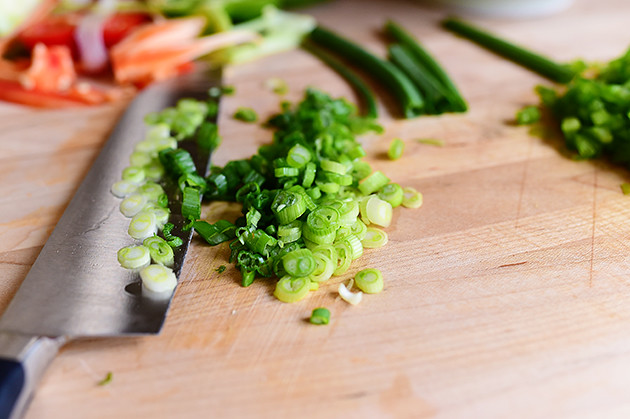 You’ll also need some sliced green onions! I slice them pretty thin so you won’t get a huge chunk of…well, green onion. 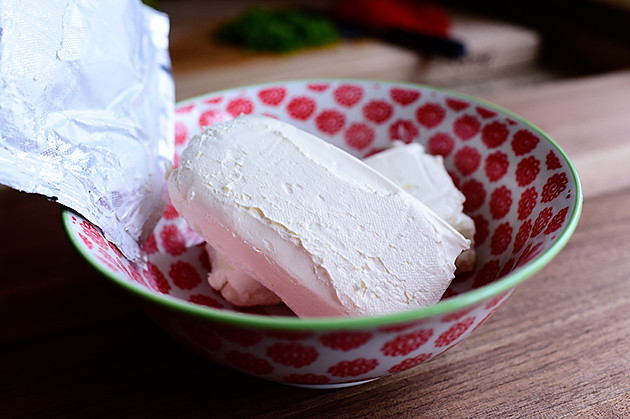 Now, get the cream cheese ready! Two oughta be enough. Let it soften on the counter for a couple of hours first. 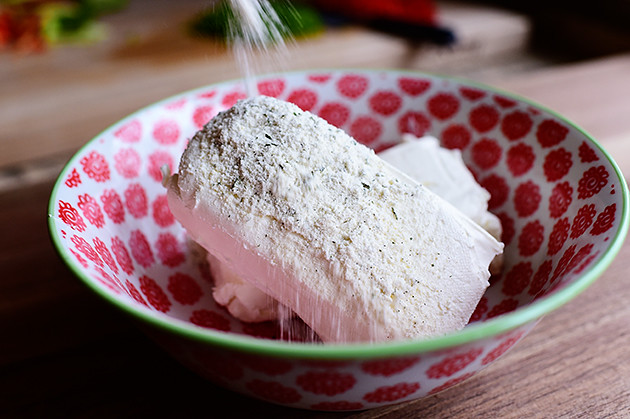 Then, for the top secret seasoning. Make sure you don’t share this recipe with anyone else because as I said, it’s top secret: Just sprinkle in a little less than a full packet of ranch seasoning mix. It’s what many tortilla rollups have in them, and most importantly, it’s what Hyacinth did. 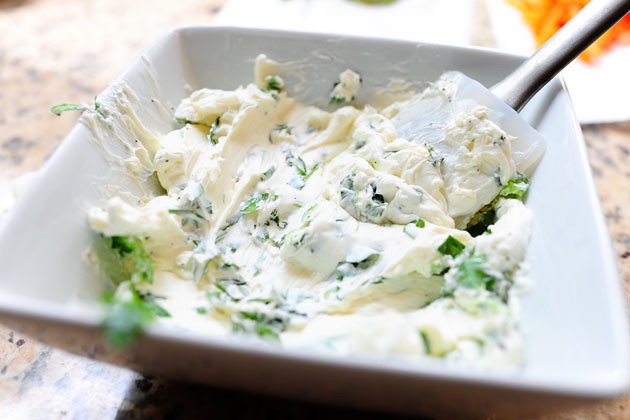 Now, if ranch seasoning mix makes you want to hurt someone, you can just make your own cream cheese mixture or make your own seasoning. This is a photo from the tortilla rollup recipe I posted back in 2012, and I used green onion, basil, parsley, lemon juice, and salt and pepper. Utterly delicious!

Or you can just sprinkle in some garlic salt, paprika, and whatever else you can find in your spice cabinet.

Just make the cream cheese mixture delicious, no matter what direction you head. Just be sure not to put any colors other than green or red in it, because it will mar the Christmas color scheme, and that would simply be unconscionable! 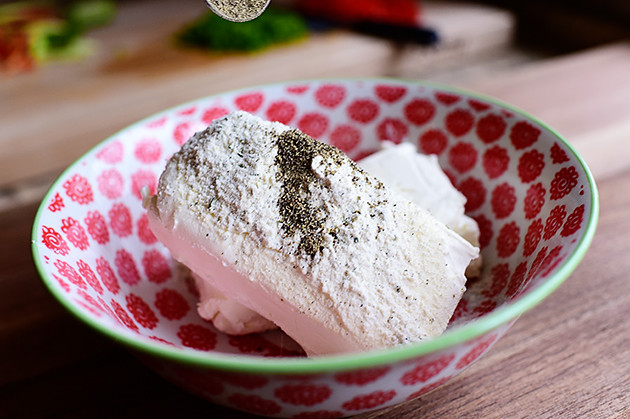 Okay, back to yesterday’s rollups: I also added some black pepper, just to give it a little zip. 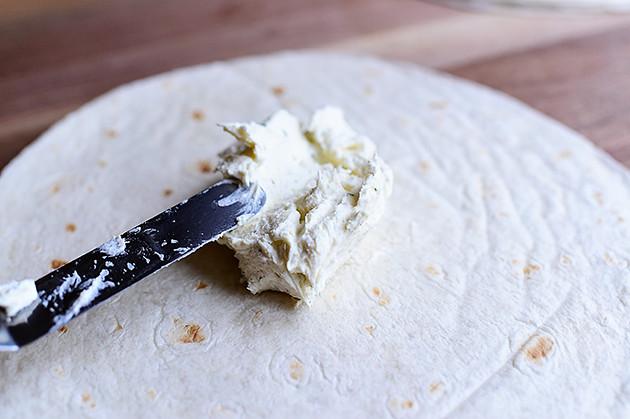 Now it’s already time to assemble the rollups! Plop about 1/4 to 1/3 cup of the mixture right in the center… 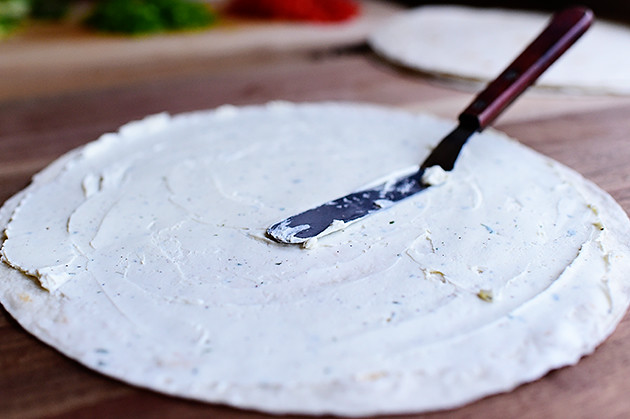 And use a spatula or knife to smear it all over the surface. Get all the way out to the edges!

It’s Christmas, after all. 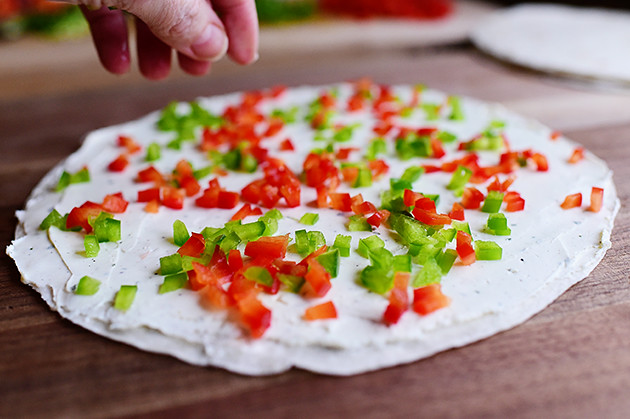 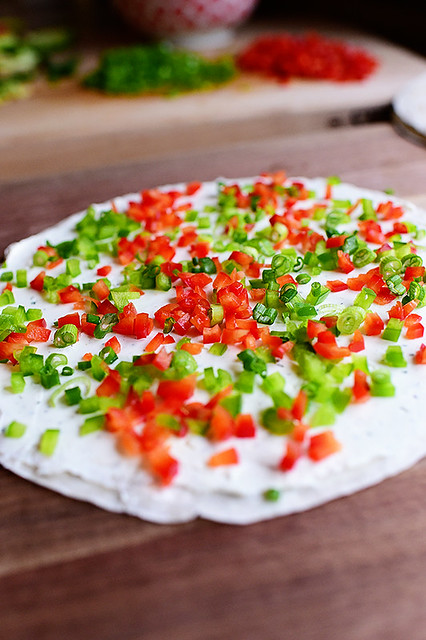 Followed by some green onion.

***This is a good time for me to remind you that at this point, you can put whatever you want in the tortilla rollups: chopped black olives, shaved turkey, shaved ham, jalapenos, green chiles, fresh veggies, lettuce, herbs, etc. Just make sure you can roll up the tortilla when you’re all finished! 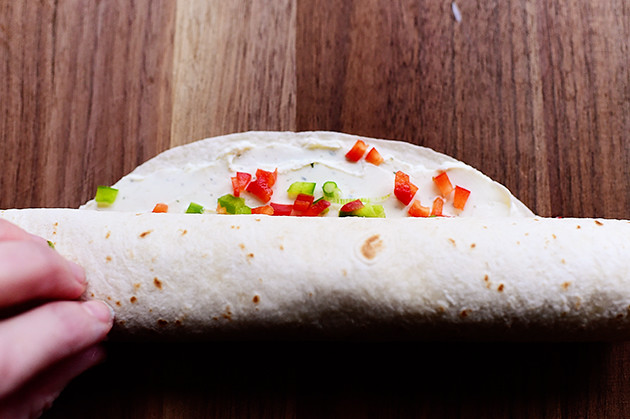 And then? Just roll it up. Keep it as tight as you can while you roll it to make sure the sliced rounds look nice and neat later. 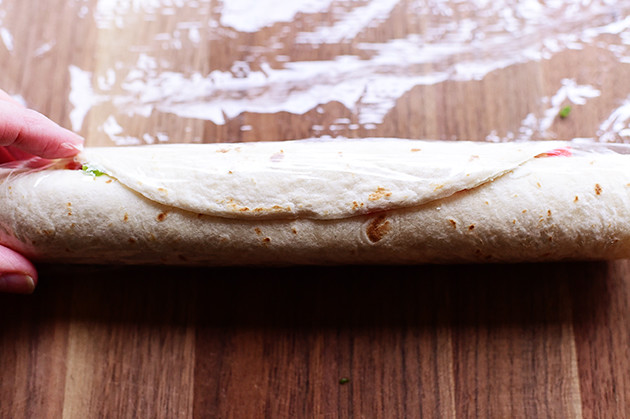 Since there’s cream cheese all the way out to the edges, the end should stick/seal perfectly. 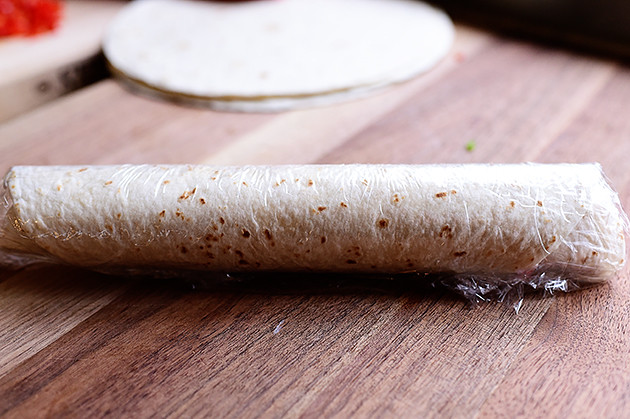 Then just repeat with the rest of the tortillas (you should go through 5 burrito sized tortillas) and wrap the rolls individually in plastic wrap. 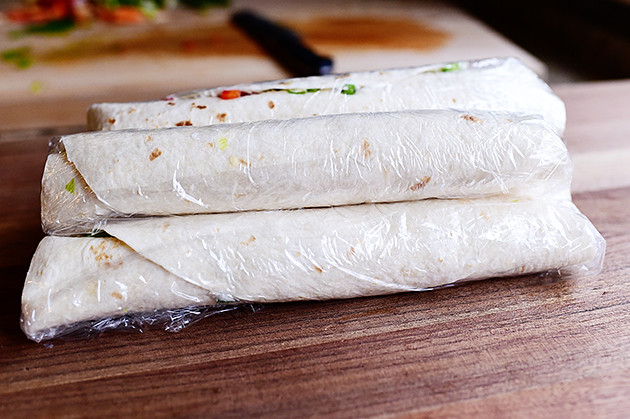 Then you just need to pop the rolls into the fridge for at least an hour, or up to 8 hours to allow the flavors to combine and the tortillas to slightly soften. That’s the fabulous thing about tortilla rollups: You can make them the morning of your party, then just slice them up right before you serve them. 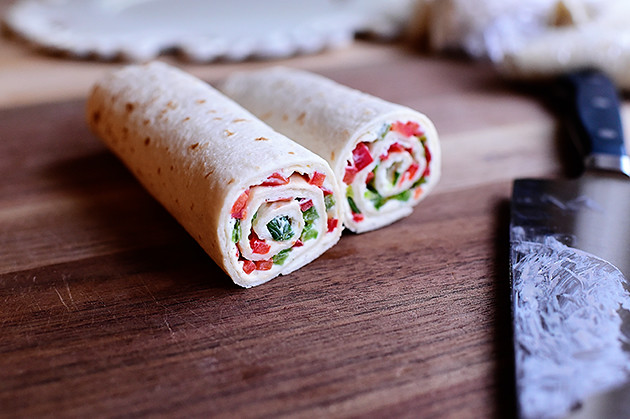 After they’ve chilled awhile, slice them in half… 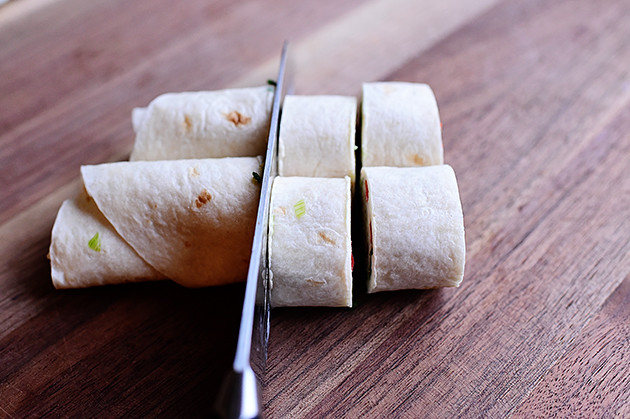 Then put the two halves together and slice them into circles. 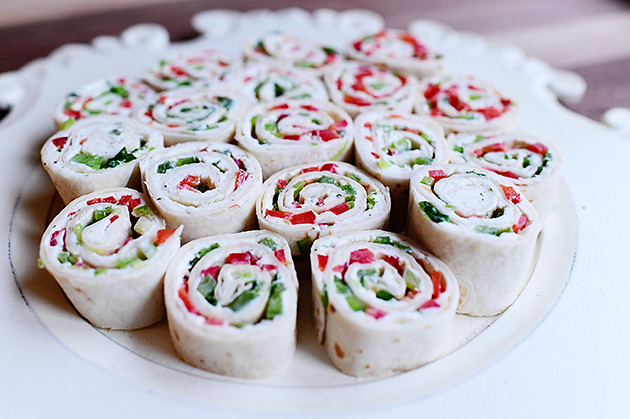 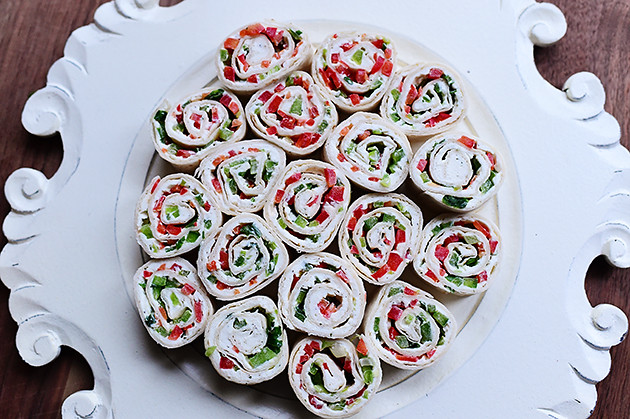 Onto platters they go! 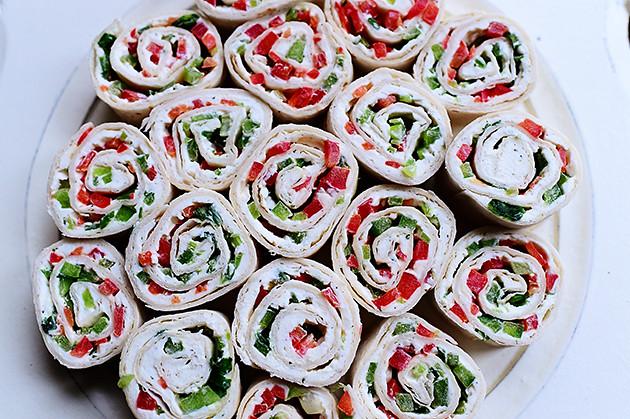 And here you can see the benefit of sprinkling the diced peppers over the cream cheese rather than mixing them into the cream cheese. You get to see all the pure, unadulterated color, whereas if you mixed the veggies in with the cream cheese, the bits of red and green would be all messy and smeared with white, and again—that would be unconscionable. 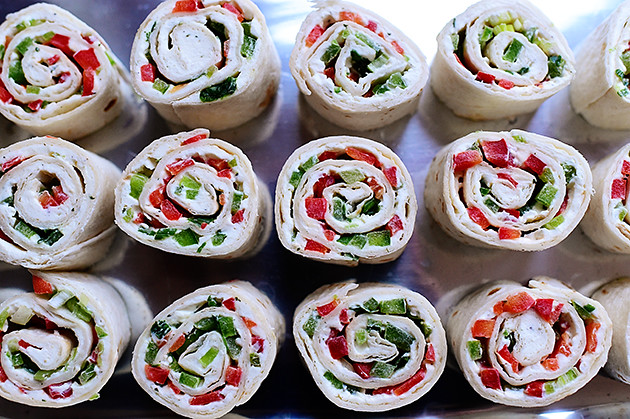 You can cram/crowd them onto a platter as in the previous few photos, or you can space them out a little bit. They’re so delightful, and no one can eat just one! In a bowl, mix the cream cheese, 1/2 to 3/4 of the packet of ranch dressing mix (add the rest to taste), and pepper with a wooden spoon until totally combined. Divide equally among the tortillas and spread into a single layer all over the surface of each tortilla.

Sprinkle on the red and green bell pepper, as well as the green onion. Roll them nice and tight, then wrap them individually in plastic wrap. Store in the fridge for at least 1 hour or up to 8 hours.

Before serving, slice into 1/2 to 3/4 inch slices and serve on a platter.

Add fresh herbs if you have them.

Hillcat Athletics To Celebrate National Girls and Women In...

FREE Coffee and How We Can Help Chick-fil-A Claremore

Okay, Claremore....a couple of things. First of all, it's Java January at Chick-fil-A Claremore! Stop by during breakfast between 6:30a - 10:30a and get...
Read more
Food & Beverage

Claremore Made the List for Oklahoma’s Best Independent Bakery!