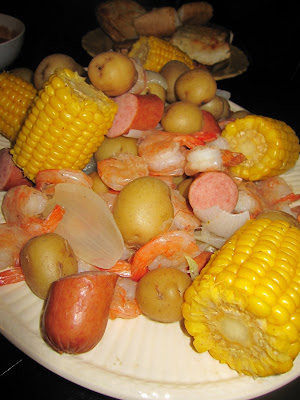 Once upon a time, before my husband and I had children, we used to go out for dinner with friends. This was the mythic time of free-flowing adult beverages, uninterrupted conversations, and nowhere to go and nowhere to be. There was never a bedtime and nary a high chair or diaper bag in sight. Two birthing experiences later, I can almost remember it.
One of our favorite haunts was an unrepentant dive at 15th and Memorial in Tulsa – The Cajun Boiling Pot. It was filled with booths covered in bright orange naugahide and prominently featured at the front of the restaurant was a horse trough full of cold longnecks, where customers helped themselves. In retrospect, I always wondered if this passed muster with state beverage laws.
You’ve got to love a place where the beer is plentiful and cold. There were no dishes, just a large piece of butcher paper and a roll of paper towels. The only utensil was a bread knife, with which to butter a piece of white sandwich bread served in a basket. There were two things on the menu – shrimp boil hot or shrimp boil mild. And you ordered by the person.
The waitress would come out carrying a large Dutch oven and dump the concoction – shrimp, corn-on-the-cob, onion, kielbasa sausage, red potatoes, and sometimes snow crab legs or crawdads (for an extra charge) on your table, stopping long enough to deposit cocktail sauce and a vat of melted butter for dipping.
Your fingers were your only utensils. I have a strong memory of people slurping on their fingers. There also was a small stage in the corner and live country music on most nights, especially Friday and Saturday. This was redneck dining at its finest. My husband and his friends were in “Hog Heaven.”
You can imagine the crying and gnashing of teeth that occurred when, without ceremony, The Cajun Boiling Pot closed. Could those forgotten beverage laws have had something to do with it?
We retreated to other favorite restaurants to lick our wounds, suck Old Bay seasoning from beneath our fingernails, and wax poetic over the contents of that Dutch oven.
Then, one evening, I became convinced that I, too, could boil shrimp. I mean, really, how hard could it be? The result was so good that my husband pronounced it “as good as The Cajun Boiling Pot,” which I consider the ultimate compliment, coming from him. Best of all, it was so easy to make that it became a favorite, easy weeknight dish. 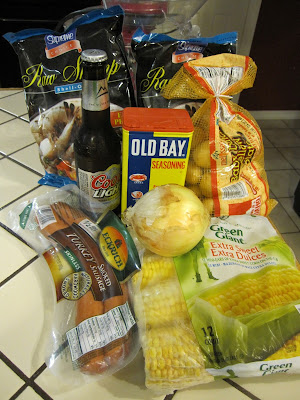 Here’s how you can enjoy fine redneck dining, too:
1 bottle of beer, any kind (try O’Douls if you’re into non-alcoholic options)
2 c. water
2 to 3 tablespoons Old Bay Seasoning (more or less, to taste)
1 T. salt
1 onion, quartered
1 package small boiling potatoes, red or yellow-skinned
9 frozen sweet corn on the cob halves
1 package smoked turkey sausage, cut into 1-inch dice
2 lb. raw shrimp in shells, frozen
Tabasco sauce, optional
1 stick butter, plus 1/2 stick more
2 c. ketchup
3 to 4 tablespoons creamed horseradish
2 tablespoons fresh lemon juice
1 large French bread
Using a large Dutch oven on your stovetop, heat the entire bottle of beer, water, salt and Old Bay Seasoning until boiling. If you like spice, use more Old Bay, if you like less, use less. You can also add dashes of Tabasco sauce to spice it up even more, if you wish. Add potatoes and onion quarters. Boil until nearly done, about 10 minutes. Add corn and sausage. Heat through. Finally, add raw shrimp. Cook shrimp just until pink. Meanwhile, place 1 stick of butter in a microwave-safe bowl and microwave just until melted. To make a lovely cocktail sauce, in a separate small bowl, mix together ketchup, horseradish (again to taste, add more if you want it hotter), and lemon juice. A couple of shakes of Tabasco in the cocktail sauce never hurt anybody. Slice French bread in half lengthwise, butter with 1/2 stick on both sides and place on a sheet pan. Bake until nicely crisped. Cut into slices. 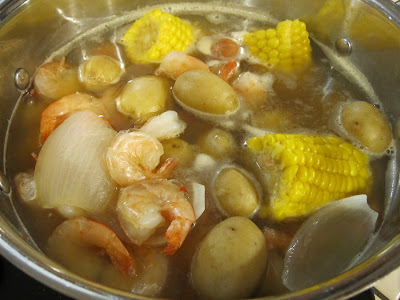 To serve, remove the Shrimp Boil from the boiling liquid with a slotted spoon. Place on a large serving platter. Put melted butter and cocktail sauce on the table and place sliced bread on a serving platter. Let family members serve themselves. To make this dish extra-special and company-worthy, add crab legs to the pot. Hint: an additional plate for scraps, such as shrimp shells, corn cobs, crab shells, etc. will be greatly appreciated by diners. Or, if you’re a redneck, just spread old newspapers on the table and let it rip!
Trust me…this one will become a family favorite!
http://www.angelahendersonisclaremom.blogspot.com/2013_08_01_archive.html
-by Angela Henderson

Farmers to Families and Mercy Chefs continue to distribute grocery boxes in Rogers County. Below is this week's schedule. Boxes are available to anyone;...
Read more
Food & Beverage

On Monday, March 29, stop in for lunch or dinner at J Farley's and 15% of the proceeds will be donated to the Justus-Tiawah...
Read more
Food & Beverage